(Throughout my career in the military and now in the ministry I have been blessed to work with some amazing leaders. After reflecting on what they have taught me I have written a short series called Leadership 101.  The aim of this series is to share a few simple short lessons on leadership traits and principles.)

I remember the day I was promoted to Captain a friend and mentor who pinned the bars on my collar looked me in the eyes and simply said, “Remember, today is not about you.”

This was not the first time I had ever heard this lesson. It was engrained in my brain from the first day I attended boot camp and I was continually reminded of it by the personal examples of the many Marines I served with. The classic manifestation of this is that in the Marines, leaders eat last. (I wrote about that here). That tradition set the leadership tone for each unit I served with.

While learning and preparing for leadership roles is an inward exercise requiring self-reflection and personal discipline, the actual practice of quality leadership is entirely an outward exchange. This change in perspectives is often the biggest challenge for leaders. As Jack Welch, former CEO of GE once said, “The day you become a leader, it becomes about them. Your job is to walk around with a can of water in one hand and a can of fertilizer in the other hand. Think of your team as seeds and try to build a garden. It’s about building these people, not about the gardener.”

But when I truly reflect on this lesson, I am reminded of Marine First Lieutenant Nathan Krissoff. On 9 December 2006, Nate was killed in an IED attack while supporting 3rd Reconnaissance Battalion in al-Amariyah, Iraq. At his memorial service his parents shared the last letter they received from him about a month before: 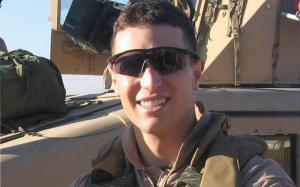 “…My success will be gauged by the responsibility to lead my Marines and accomplish the mission, not by any other metric. I’m lucky to be deploying with such a phenomenal, savvy group of guys. I choose this and wouldn’t have it any other way. It’s not about me.

Nate chose a path that was hard for him and for his family, on behalf of the rest of us. His family members, while suffering the unimaginable pain caused by Nate’s death, doubled down on national service. His brother, Austin, accepted a commission as a Marine officer just days after Nate was killed. Their father, orthopedic surgeon Bill Krissoff, was inspired by Nate’s service to the extent that he sought and received an age-waiver from President George W. Bush to join the Naval Medical Corps at the age of 62. He deployed to Iraq and Afghanistan in honor of his son.

Great post Brad! I remember when I learned this lesson. I was a Marine Sergeant and 1stSgt Richard Vazquez became my mentor and advised me that if I wanted to be successful in the Marine Corps, I should ensure that my people were successful. It’s not about us!

I liked this so much that I researched Lt Krissof. Crazy stuff! Makes me wonder if I’m doing my best to grow those I’m in charge of, both civilian and Marines. I read an article about his dad too. That is heroic in itself! Thanks for sharing.