154 years ago, the largest military conflict in North American history began when Union and Confederate forces collided at Gettysburg, Pennsylvania. The epic battle lasted three days and resulted in a retreat to Virginia by Robert E. Lee’s Army of Northern Virginia.

Throughout my military career, and even still today, I am an avid consumer of military history. When it comes to the Battle at Gettysburg I have continually been awed by the decisions and actions of Colonel Joshua Chamberlain. I have read Michael Shaara’s Pulitzer-prize winning novel “The Killer Angels” and watched Jeff Daniels remarkably play Chamberlain in the movie “Gettysburg.” However it was not until I had the privilege of taking a group of my Marines to the actual battlefield that I truly understood this tragic conflict. 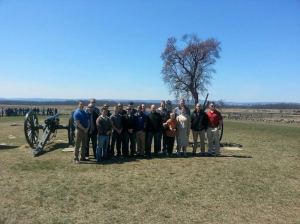 Together we climbed the slope of Little Round top and walked the path of Pickett’s Charge. We studied the defensive positions on Cemetery Hill and continually discussed the decision making of opposing Generals Lee and Meade. From human factors to combined arms, we immersed ourselves in the significance of this three day battle.

During a moment of reflection on the hallowed ground of Little Round Top, I paused to think about the decisions Chamberlain had to make. Against all odds, he stubbornly and courageously rallied his forces. Many historians claim his actions saved the day and possibly turned the tide of the Civil War. For his actions, he was awarded the Medal of Honor. His citation simply stated: “For daring heroism and great tenacity in holding his position on the Little Round Top against repeated assaults, and carrying the advance position on Big Round Top.”

The world will continually tell my wife and children lies about their identity.

They will be continually be presented with expectations that drown their worth.

They will continually be attacked….

I have always been amazed at how one man can change the course of a battle. Husbands and Fathers….more than ever before, I believe it is our duty to now do so.

Will you join me?

3 thoughts on “Courage Under Fire”

In my hands is the most feared weapon on earth. The Bible. Arm in arm I will march with you my brother. Strength and honor and all glory to God the father.

Love this post! Thank you for fighting for freedom in our nation and in our homes. I’m honored to be your friend! 🙂

bflurry posted: “Early July 1863…. 154 years ago, the largest military conflict in North American history began when Union and Confederate forces collided at Gettysburg, Pennsylvania. The epic battle lasted three days and resulted in a retreat to Virginia by Robert E. “

Love your insight and wisdom. Grateful for your example as a servant leader!